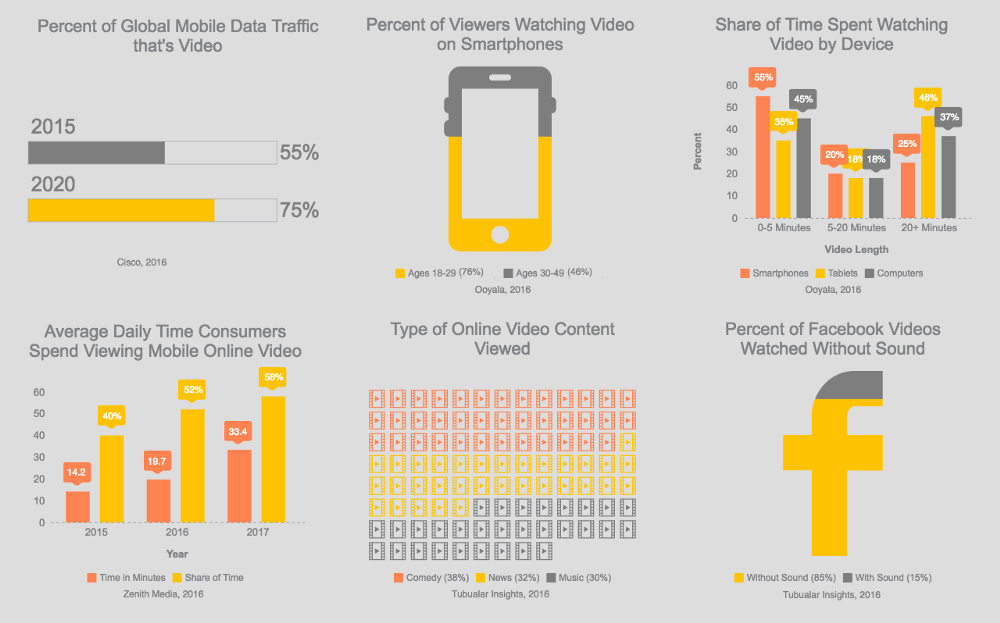 Those scrolling through their social media feeds are increasingly watching videos produced specifically for social networking platforms — and they’re likely on a mobile device at the time.

Facebook’s study of 1,500 people shows that social media users like the convenience of “mobile videos”: they’re typically short and can be consumed anywhere and at anytime. Time spent watching videos on social media in the past year has increased significantly, and all signs indicate that this trend will continue.

These habits have significant implications for how journalists produce video for social media. They should be able to be easily-viewed on a mobile device or else the user may swipe away.

Readable Videos. In other words, through the use of text on the screen, viewers should be able to understand the story without having to turn up the volume. People may not be in a location where they can listen to the audio. Beware of cramming too much text on the screen. Use large font and color to emphasize certain words.

Vertical Video? Yes, most of the time we hold our mobile devices vertically — not horizontally. Therefore, when producing video for social media platforms we should keep in mind that many people will watch it on a mobile device. That means vertical video is more appropriate.

Live Video. There’s an appetite for live video. According to Facebook, the amount of time spent watching Facebook Live videos has quadrupled in the last year. Live video gives viewers a sense that they’re at the scene of a story and getting an authentic experience of what’s happening. Live videos work best when they’re at least 10 minutes. Since social media users aren’t always online, this gives time for people to see the live stream. Tease an upcoming live video 15-20 minutes prior. Of course, this isn’t always possible in breaking news scenarios. (See NPR’s Facebook Live guide)